Napoleon Hill changed millions of lives through his teachings, in books such as “Think and Grow Rich” and “Outwitting The Devil” – here’s some of his best advice… (and our interpretation of it)

“The starting point of all achievement is desire. Keep this constantly in mind. Weak desires bring weak results, just as a small fire makes a small amount of heat.” – Napoleon Hill 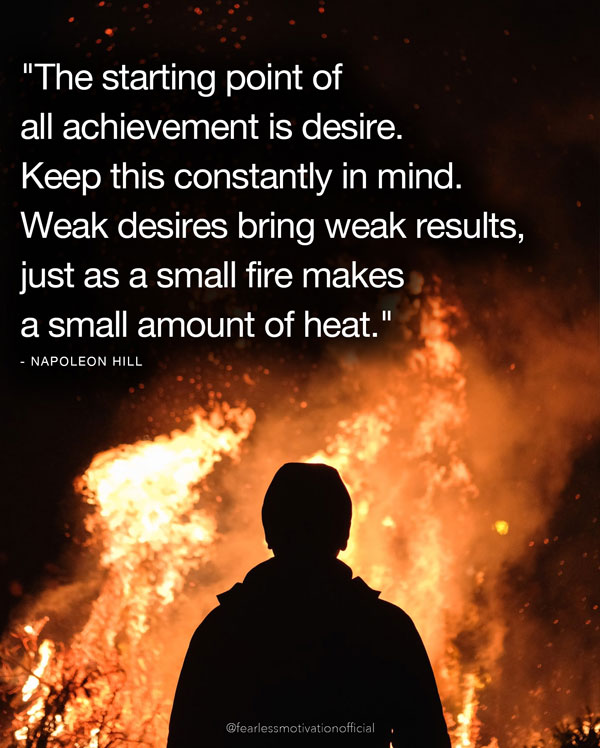 Without DESIRE there is no FIRE. The fire within can only come out when YOU really want it to…

That is why the START of anything GREAT is the moment YOU DECIDE you HAVE TO HAVE IT. That burning desire from within… that moment when YOU DECIDE: THIS IS IT!

That is the start of something great. Do whatever you can to find that spark, to get that FIRE WITHIN burning.

“Victory is always possible for the person who refuses to stop fighting.” – Napoleon Hill

NOTHING is over for the person who REFUSES to give up.

There is no failure to the person who DOES NOT QUIT… there is only DELAYED SUCCESS.

If it isn’t happening right away: DO NOT QUIT. Have patience for the fact that it hasn’t showed up yet, but impatience in working TOWARD IT.

Persist… and eventually it will be YOURS!

“Strength and growth come only through continuous effort and struggle.” – Napoleon Hill

“Every adversity, every failure, every heartache carries with it the seed of an equal or greater benefit.” – Napoleon Hill 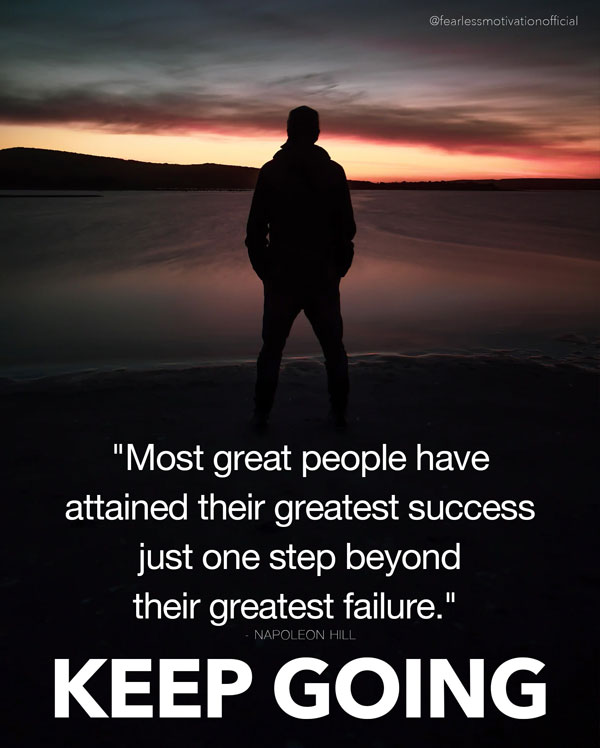 Most people strive for a life of little or no struggle. No-one seeks pain or challenges and nor should they… but that is precisely where GROWTH lies. In the challenges and the struggle that come from PUSHING for what you really want in life.

Those who refuse to go after what they truly want in life have failed by default.

If you’re really pushing to become the VERY BEST VERSION of yourself… there is going to be FAILURE… there is going to be HEARTACHE, EMBARRASSMENT and everything in between… but if you refuse to quit… if you persist… not only will you succeed in getting to your goal… but you will EARN something much more valuable: PRIDE and CHARACTER.

Pride and character only come from GROWTH. GROWTH only comes from pushing yourself. You can’t buy it, you have to EARN IT.

“Tell me how you use your spare time, and how you spend your money, and I will tell you where and what you will be in ten years from now.” – Napoleon Hill

How can you tell what your future will look like? Have a look at your daily habits.

If they are strong, your future will be strong.

You have to be INTENTIONAL about how you spend your time and your money.

Create a plan of daily action that will, over time lead to strong habits…. Habits that will move you closer to your goals.

“A goal is a dream with a deadline.” – Napoleon Hill

Goals are great, but without deadlines they are WISHES, HOPES… DREAMS.

Dreams can only come true if you get serious about them… and the first step to getting serious about your GOALS is to set a DEADLINE for when you must achieve it.

It should be difficult enough to reach to get you MOVING immediately… but realistic enough to attain.

It should be a struggle to attain it… but not impossible.

Another way of saying it is: The person you are right NOW should not be able to achieve it. You will have to GROW into someone else entirely by pushing yourself, in a positive way to make sure it is achieved.

That is a GOAL!

“When defeat comes, accept it as a signal that your plans are not sound, rebuild those plans, and set sail once more toward your coveted goal.” – Napoleon Hill

Defeat comes to all of us. Most of us give up.

Don’t be like most. When temporary defeat visits you – take responsibility. What can YOU DO BETTER?

How can you USE the failure as a lesson. How can your PLAN or PATH be clearer next time around?

DO NOT GIVE UP.

SHOCK everyone with your persistence and staying power. Then shock them with your results the second time around.

“Whatever the mind of man can conceive and believe, it can achieve.” – Napoleon Hill

“There are no limitations to the mind except those we acknowledge.” – Napoleon Hill

Napoleon hill believed there were NO LIMITS.
Most of the greatest people in history refused to entertain the limits of the majority. If they did… they’d never have been great and we’d perhaps never know they existed.

REFUSE to accept limits of your family, friends or society.

If it’s never been done before… believe you can be the FIRST.

If no one believes in you… BE THE ONE WHO STARTS.

It is very clear that MINDSET is the greatest asset you can have if you want to do great things with your life.

Develop that mindset, believe in yourself and become unstoppable.

“The ladder of success is never crowded at the top.” – Napoleon Hill

The ladder of success is never crowded at the top, because most people settle.

They refuse to put in the effort at the start, and so their life… getting through the day becomes a giant effort.

Be one of the few who aren’t afraid to take the harder path EARLY ON so you can enjoy the easier path later in life. Keep climbing that ladder, and when you get to the top, see if you can inspire someone else to work their way up too.

“It takes half your life before you discover life is a do-it-yourself project.” – Napoleon Hill

“If you do not conquer self, you will be conquered by self.” – Napoleon Hill 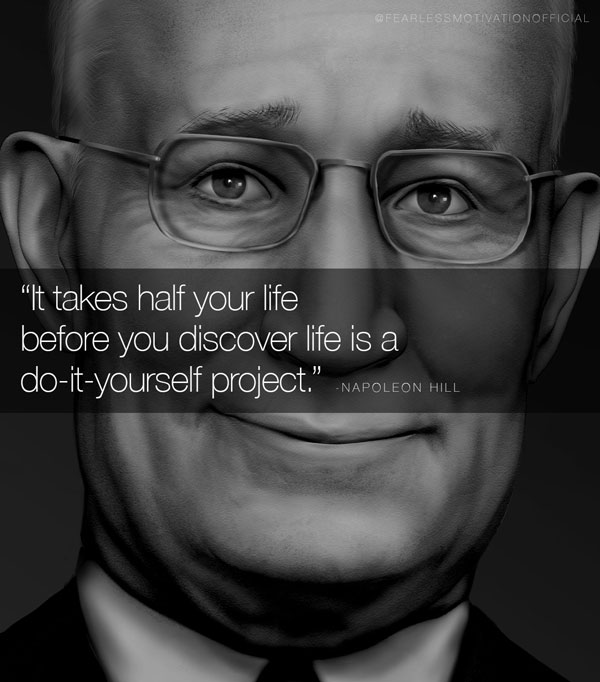 This life of yours is exactly that… YOURS.

The government can tax you to the hills… but no one can tax your mind… that is ALWAYS something YOU CONTROL. No one and no event can conquer you but YOURSELF.

Take care of your mind, there is nothing more important. Nurture it with positive thoughts, with teachings that help you to GROW, with anything and everything that makes you feel better, stronger as a human being.

There is nothing more important.

“The way of success is the way of continuous pursuit of knowledge.” – Napoleon Hill

“Deliberately seek the company of people who influence you to think and act on building the life you desire.” – Napoleon Hill

“Education comes from within; you get it by struggle and effort and thought.” – Napoleon Hill

No one ever got ahead by acting like they knew everything about everything.

Be humble enough to know you DON’T KNOW everything

Be curious enough to SEEK new knowledge EVERYWHERE you go. In books, in teachings and in EVERYONE you speak with.

There’s always something to learn, from everyone.

Surround yourself with mostly people that will either enhance your future, or make you feel good in the present.

“You are the master of your destiny. You can influence, direct and control your own environment. You can make your life what you want it to be.” – Napoleon Hill

“If you cannot do great things, do small things in a great way.” – Napoleon Hill

“Don’t wait. The time will never be just right. Start where you stand, and work whatever tools you may have at your command and better tools will be found as you go along.” – Napoleon Hill

What is your favourite lesson from Napoleon Hill? Share with us in the comments.

The Power of Moments: Why Certain Experiences Have Extraordinary Impact

JAY-Z: Made in America

What Should Danny Do? School Day (The Power to Choose Series)

The Joy of Being Retired: 365 Reasons Why Retirement Rocks — and Work Sucks!

Cracking the Tech Career: Insider Advice on Landing a Job at Google, Microsoft, Apple, or any Top Tech Company

$15.98
BUY
Product Categories
About Us